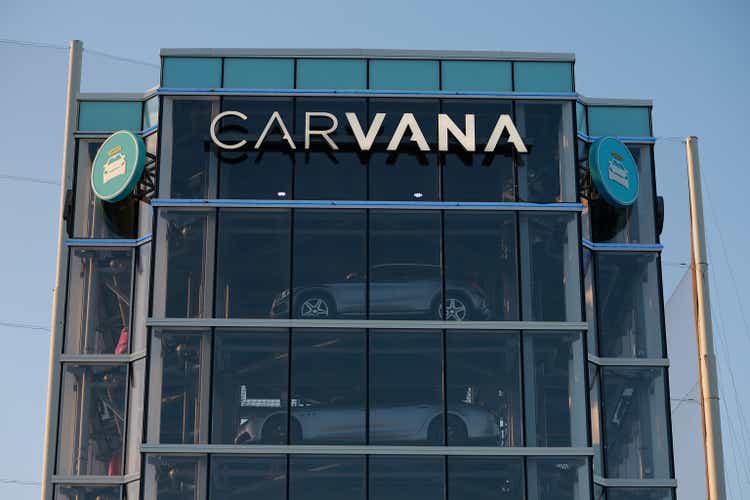 Carvana’s (NYSE:CVNA) share price capitulated after it announced its Q1 2022 results. CVNA growth slowed considerably, and margins deteriorated. This is a huge step backward as CVNA was on track to begin generating cash organically to fund its rapid growth. The shares fell further after it raised bonds at an onerous interest rate of 10.25%, worse than expected. The used car industry outlook is likely to worsen with stagflation fears and higher interest rates which makes raising capital expensive. CVNA pivoted from prioritizing high growth to maximizing cash flows to ensure that it could tide through this challenging period. The change in operational strategy was a watershed moment for CVNA’s investors as the investment narrative for CVNA changed. CVNA was a high-growth stock about to prove its business model viable as it stops burning cash and was trading a very high valuation multiple (6x sales). It has become a potential distressed company play, especially after its onerous capital raise and the challenging macro environment.

CVNA’s capitulation coincided with the selloff of other high-growth, unprofitable, and cash-burning tech stocks. The broad selloffs are due to inflationary pressures, forcing the Fed to tighten financial conditions by increasing interest rates at one of the fastest pace in history and commencing quantitative tightening. The likely result is a much higher yield on US treasuries and a higher equity risk premium, disproportionately impacting longer-duration stocks like CVNA. The potential recession caused by the Fed’s tightening also weighed in on cyclical stocks. Tightening financial liquidity exacerbated downside share price movement.

While CVNA’s liquidity concerns are valid, they are overblown. I believe the market had unfairly punished CVNA as it was treated in the same category as other tech stocks. And this presents an opportunity as CVNA’s fundamentals are different from the rest. Some of the factors contributing to CVNA’s poor Q1 2022 performance are transitory and are unlikely to persist. CVNA is likely to return to the prior year’s performance as those issues get resolved. Unlike some other high-growth e-commerce companies, there is evidence showing that CVNA’s secular growth narrative remains intact. The slowdown in Q1 2022 is due to a confluence of macro, industry, and CVNA-specific factors.

Liquidity concerns are overblown as the factors affecting its poor Q1 performance are mostly transitory and will be mitigated as management pivots from prioritizing growth to focusing on cash flows.

CVNA’s dismal Q1 performances were due to both industry-wide factors and CVNA’s specific factors:

Firstly, disruption from Omicron and winter storms are one-off factors and are unlikely to recur.

Next, CVNA accelerated growth at precisely the wrong time into a consumer slowdown, leaving a mismatch between capacity and demand and creating a liquidity crunch. This is the leading cause of the compression in margins. CVNA’s retail GPU per unit decreased by $403 to $808 in Q1 2022. The decline was due to $600 per unit due to an increase in reconditioning and inbound transport costs. Another $100 per unit decline was due to a decrease in shipping revenue, driven by refunds to customers following extended delivery. The mismatch in capacity and demand could be blamed on the pandemic effect. Coming out from a pandemic, with disruption to supply chains, stimulus checks, near-zero interest rates, etc., has made it harder for management to read the demand levels of the market. The blame cannot be put solely on management. Amazon also had a similar problem as its higher planned capacity was met with much lower demands, resulting in operational deleverage and poor Q1 performance. These factors are transitory, and management expects retail costs to move towards more normalized levels in the coming quarter.

The weaker industry demand in Q1 2022 could be attributable to a more robust than average demand for vehicles in Q1 2021, resulting in a more challenging comp. The strong demand in Q1 2021 was driven by stimulus money and record low-interest rates, and generally positive consumer sentiments. In Q1 2022, consumer sentiments are generally lower due to higher interest rates, poorer economic outlook due to high inflation, and the Fed’s tightening. The slowdown is due to the cyclical market cycle rather than structural reasons. As will be discussed below, the used car industry is quite resilient in a bear market, and the impact should not be as huge as other more cyclical consumer products.

In Q1 2022, many tech companies, especially stay-at-home BEACH companies, reported a significant slowdown in their top line, implying pandemic-driven gains are not as sticky and sustainable as investors thought. Their share price tanked as growth trajectory expectations were revised. Despite CVNA’s slowdown in growth in Q1 2022, there are substantial data to suggest that CVNA’s secular narrative remains intact.

Firstly, CVNA grew units at a CAGR of 55% over the past two years. Q1 2022 YoY growth of 14% seems like a vast deceleration. However, the slower growth is against a backdrop of lower industry sales of about -15% QoQ and CVNA’s poor operations during the quarter due to Omicron and severe weather conditions. This implies CVNA continues to gain significant market share.

Next, CVNA continues to increase penetration across its market. This implies that its growth is driven by both market expansion and increased penetration in current markets. With the oldest market at more than a 3.5% penetration rate, there is still a massive opportunity for growth as most of its markets are still below 1% penetration. Carvana’s current market share is only about 1% of the total market in terms of unit sales, implying it is still in its nascent stage of e-commerce growth and penetration.

Lastly, there are strong growth trends in parts of the business that are less impacted by used vehicle affordability. In Q1 2022 earning call, CVNA CEO, Ernie Garcia, mentioned:

Retail units sold to Carvana finance platform customers with a FICO score greater than 700 increased by ~50% YoY in Q1, despite the industry headwinds and operational constraints.

CVNA will have enough liquidity to tide through tough industry headwinds

Used car sales are relatively stable in the US, hovering between 36million and 40 million from 2012 to 2018. The stability in used car vehicle sales stems from the massive size of the market and the diverse segments served, with customers ranging from buyers of nearly new luxury units to customers in need of basic transportation.

In the worst case, I assume that we enter a recession as the Fed continues to tighten financial conditions to rein in inflation; Used car sales in the US will fall by 20% over the next two years (like 2008-2009). CVNA’s secular growth narrative is still intact. I assume it will continue to grow by 15% and 10% in 2022 and 2023. CVNA could gain market share at an even higher pace due to its lower price value proposition, as consumers become more price conscious during a recession.

CVNA’s business model is scalable, as higher sales have improved EBITDA and net margins historically. In 2021, it achieved EBITDA neutrality. With higher sales, it is expected to reach EBITDA positive and, after that, positive FCF. 5 of 9 of its cohorts had positive EBITDA margins, and 2 of its oldest cohorts achieved an EBITDA margin of greater than 4%.

In my financial model, most metrics will return to 2021 levels by 2023, which is reasonable since CVNA is projected to continue growing its top line. The improvement which will push CVNA into cash flow positive is compression of SG&A margin. I projected a deterioration of 18% from 16% in 2021 as CVNA had over-provided for capacity in 2022 and will be laying off 10% of its staff, incurring a one-off $40million separation expense. CVNA is pivoting from a high growth strategy to cash flow optimization. There are 3levers that CVNA can pull to bring down its SG&A costs:

In my base case, I assume growth slows to 15% in 2022 due to macro factors and CVNA’s pivot to focus on cash flow maximization rather than growth. Growth to reaccelerate to 35% as the economy recovers in 2023.

CVNA should re-rate as it shows 2 things:

This is the worst case, and it is hard to put a valuation if it comes to fruition. A lot will depend on why CVNA fails to become cash flow positive and if its secular growth remains intact. The most important will be whether CVNA’s secular growth is still intact. If it is, and that failure to achieve positive cash flows is down to poor management’s execution, then I think its management could be given a second chance to right the ship.

Mitigant: Founder Ernest Garcia III has been managing the company since its inception in 2012 and has done a decent job growing the company to become the second largest car dealer in the US and creating significant shareholder value. The recent poor quarter is due to factors including an unexpected considerable slowdown in the usually stable used car industry, coupled with much tighter financial conditions (causing it to raise onerous debt) and poor economic outlook. Moreover, Ernest Garcia III has skin in the game as he invested his own money in the latest equity offerings, contributing to half of the $1.25 billion equity raised. Shares were bought at $80 per share, a significant premium to its current share price.

In conclusion, I believe the market is pricing in the possibility of CVNA running into solvency issues. However, I believe CVNA will overcome them and become a self-sufficient high-growth company. The current share price represents an attractive entry point with a multi-bagger opportunity with a low downside in the event of prolonged macro and industry headwinds.

How to Generate More Leads Through Your Online Marketing Campaigns